By Brian Marks For Dailymail.com

She rocked a '90s-style outfit earlier in the evening while out with her friend Fai Khadra.

Bella Hadid opted for something riskier later on Monday when she shared photos of herself in a sheer outfit to her Instagram.

The 23-year-old model left little to the imagination as she posed in the mesh dress for a mirror selfie. 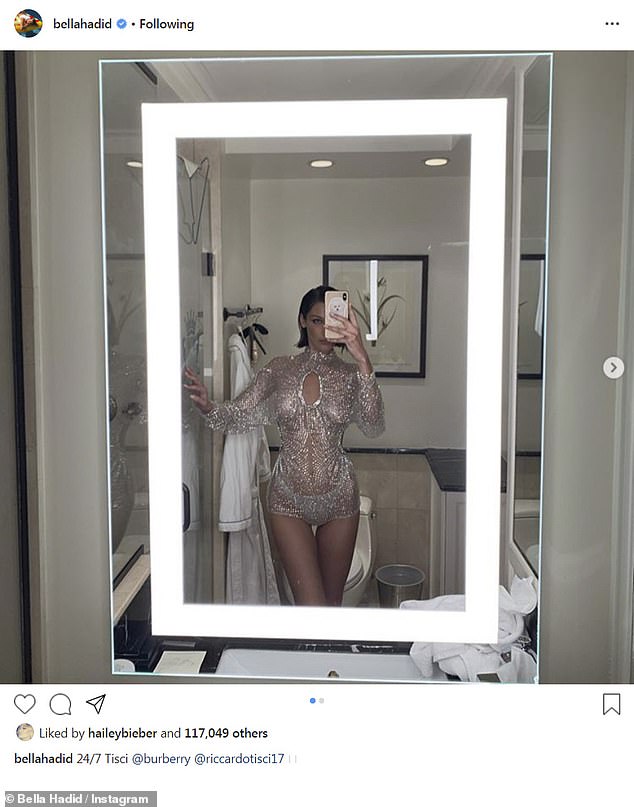 Baring (nearly) all: Bella Hadid, 23, opted for a risky selife Monday night when she shared photos of herself in a sheer outfit to her Instagram

Bella's trim frame was on (nearly) full display in the dress, which appeared to be comprised of sparkling beads held in a spiderweb pattern.

The outfit included cut-out panels over her sides and cleavage, and it barely reached down to her thighs.

The 5ft9in sister of Gigi Hadid had a pair of underwear on beneath the dress, though she didn't appear to be wearing much more than that.

Her dark brunette tresses looked wet and were styled in a messy bob with isolated strands covering her face. 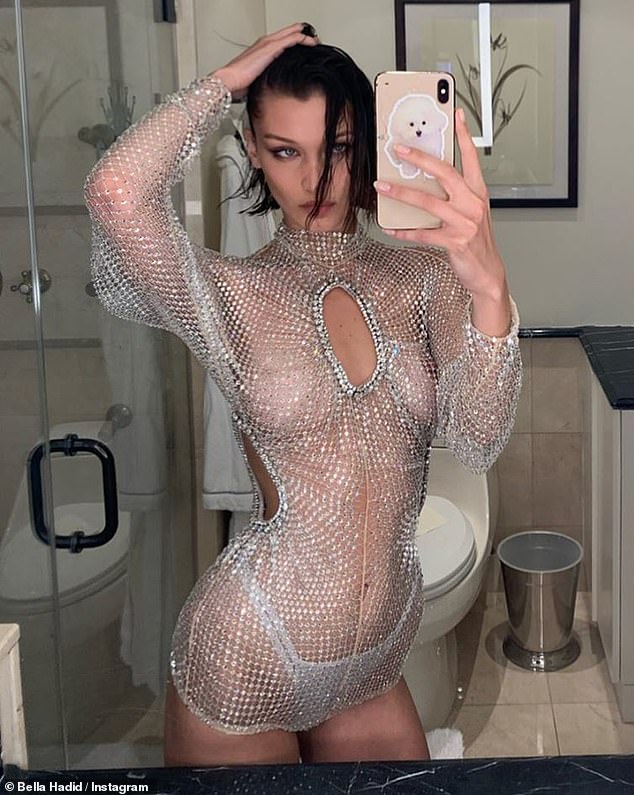 Fit figure: Bella's trim frame was on display in the mesh dress, which appeared to be comprised of sparkling beads held in a spiderweb pattern. The look had panels cut out to showcase her cleavage and trim sides

Bella showed her love for the item in her caption: '24/7 Tisci.' She also tagged the designer and Burberry, where Tisci was appointed chief creative officer in March 2018.

Earlier in the evening, she covered up in a snakeskin-print jacket and all-black top and jeans for a night out with her longtime friend Fai Khadra.

Only days earlier, the catwalk star was spotted out with her fellow model sister Gigi on their way to the swanky Mediterranean–Italian spot il Buco. 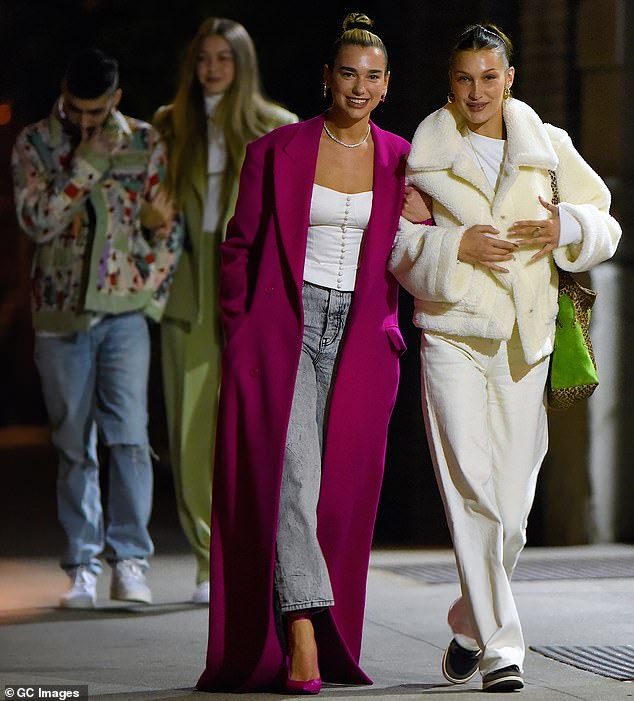 The whole gang: On Saturday, Bella covered up in a fleece coat and baggy white jeans for a trip to swanky Mediterranean–Italian spot il Buco with her sister Gigi Hadid, Zayn Malik and Dua Lipa 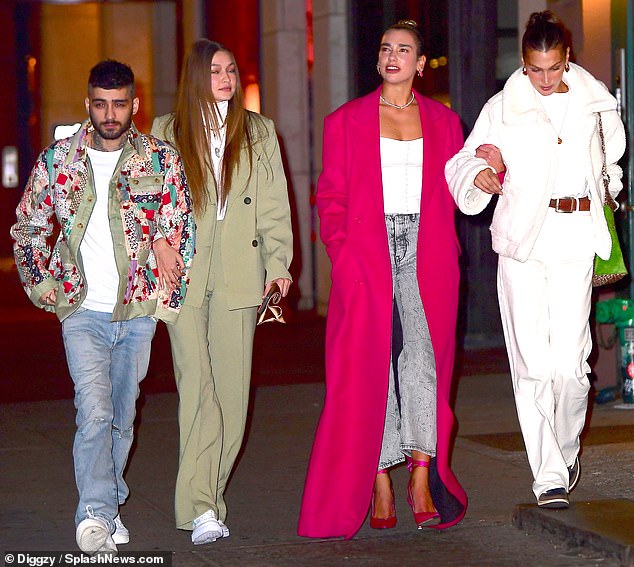 It's official: The outing made Gigi's reunion with Zayn official, though the two were suspected to be back together as early as December

Bella cozied up to her friend Dua Lipa, who's currently dating her younger brother Anwar Hadid.

The outing also confirmed that her sister Gigi had restarted her relationship with former One Direction singer Zayn Malik.

The on–off couple sparked rumors of a renewed romance in December, when she shared a recipe to Instagram and tagged Zayn's mother, but their locked arms were the first public confirmation that they were back together. 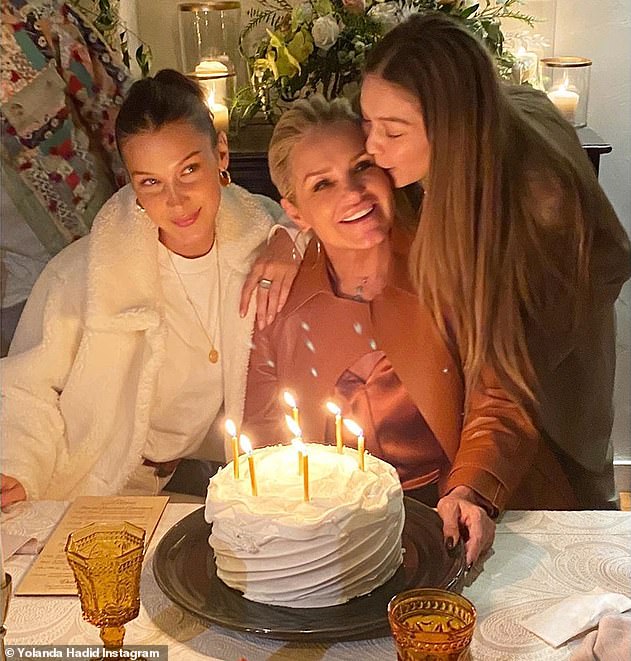 Happy Birthday: Yolanda Hadid celebrated her 56th birthday alongside her model daughters Gigi and Bella on the same day 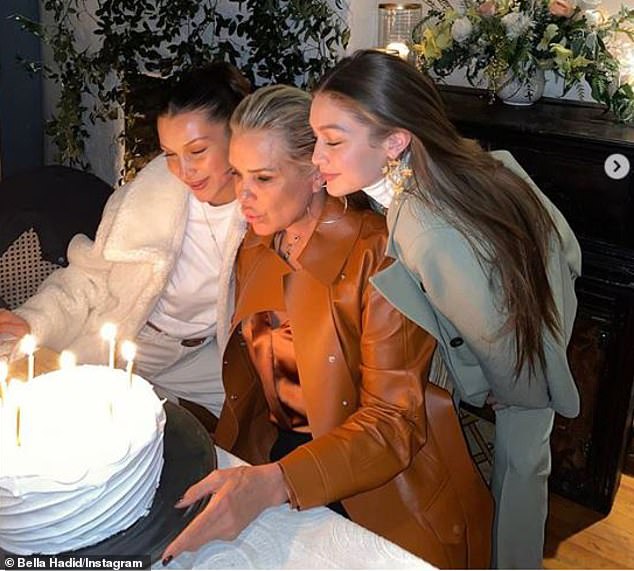 Our Capricorn: Bella Hadid shared this particular image on her Instagram account on Saturday, labeling Yolanda as her and Gigi's 'capricorn'

Zayn's birthday was on Sunday, but Bella's mother Yolanda Hadid had her birthday on Saturday, so the group celebrated both events together.

She commemorated the occasion with a photo of her mother blowing out the candles on her snow-white cake.

Bella also shared a slideshow of throwback photos going all the way back to her childhood. 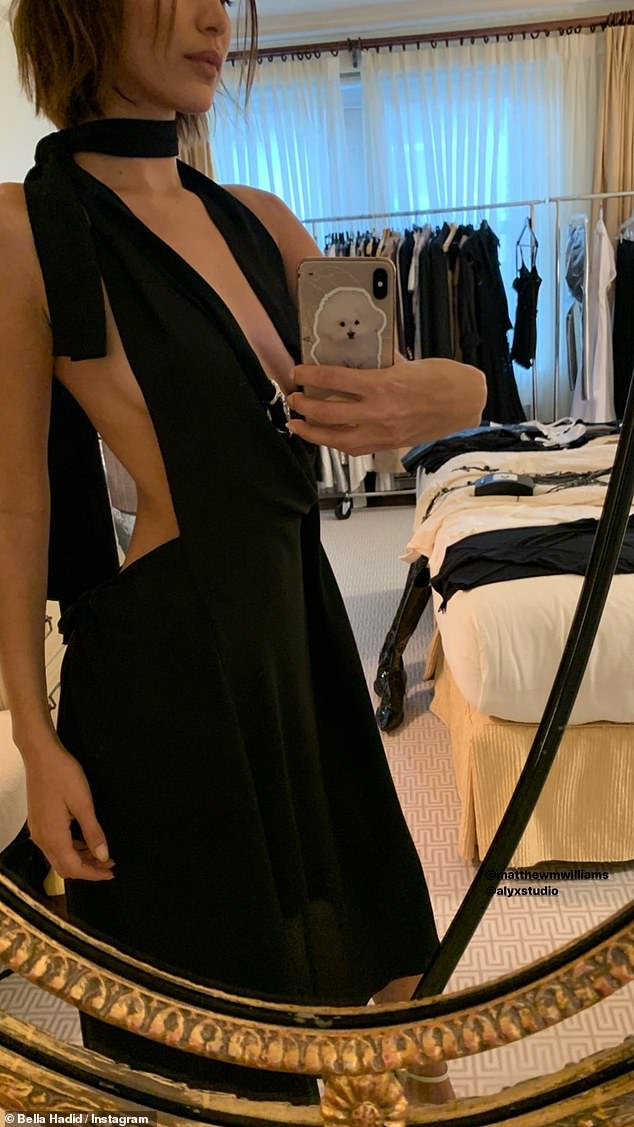 Back in black: Bella shared a photo of a super low-cut black dress to her Insta Stories on Monday